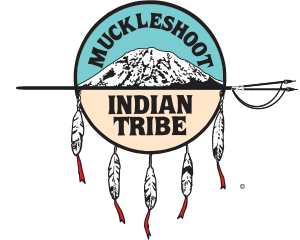 Muckleshoot Casino opened in April 1995 and is owned and operated by the Muckleshoot Indian Tribe. Learn more about the Tribe at their official website.

The area from the Cascade foothills to the eastern shores of Puget Sound, and the rivers and streams of the Cascade Range that flow into it, form the ancestral homeland of the federally-recognized Muckleshoot Indian Tribe. The Muckleshoot Reservation is located southeast of the City of Seattle on a plateau between the White and Green Rivers in the shadow of Mount Rainier.

PEOPLE OF THE SALMON

During the millennia that preceded their displacement by American settlers and industrial interests, Tribes living in the Northwest Coastal Region were among the most prosperous on the continent. Like all native people of Western Washington, Muckleshoot ancestors depended on fish, animal, and plant resources and traveled widely to harvest these resources.  At the base of their prosperity was the salmon, which – then as now – the people regarded with great reverence.

THE TREATIES AND ESTABLISHMENT OF THE MUCKLESHOOT RESERVATION

In 1854 and 1855, Territorial Governor Isaac Stevens negotiated treaties with the native inhabitants of Puget Sound. The Muckleshoot Tribe is party to two of these treaties, the Treaty of Medicine Creek and the Treaty of Point Elliott. The Muckleshoot Reservation was established in 1857 and enlarged in 1874 by Executive Orders under the provisions of these Treaties which also reserved the Tribe’s right to fish, hunt, and gather natural resources outside of the Reservation.

The Tribe is governed by an elected nine-member Tribal Council. With the advice and input of the General Council, which is comprised of all community members, the Tribal Council works to provide a full range of government services to the Reservation community.

Today, the Tribe is a major contributor to the local economy and community providing resources to other governments, schools, nonprofits, and churches throughout Washington. The benefits of the Muckleshoot Tribe’s economic revival go well beyond its financial contributions to the local community. From landmark agreements protecting fish and wildlife habitat to innovative educational programming, and hundreds of partnerships with organizations serving those in need throughout the state, the Muckleshoot Tribe is contributing to the quality of life of its citizens and neighbors.