Oak View Group and NHL Seattle have announced the Muckleshoot Indian Tribe’s Muckleshoot Casino as an official partner with a blessing of the land at the New Arena at Seattle Center.

A federally recognized Indian Tribe whose membership is composed of descendants of the Duwamish and Upper Puyallup people who inhabited Central Puget Sound for thousands of years before non-Indian settlement, the Muckleshoot Indian Tribe was invited to bless the land on which the New Arena at Seattle Center is taking shape, as a symbol of respect for the deep Tribal heritage of the region. Filled with prayer, dance and song, the October 30 ceremony also served as a moving testament to the resilience of hope and new beginnings.

“We are grateful to the Muckleshoot Tribe for their blessing of these arena grounds, which we acknowledge are on Indigenous land and the traditional territories of the Coast Salish people,” stated Mari Horita, VP of Community Engagement and Philanthropy for NHL Seattle. “The Arena project is about honoring the past and embracing the future, and our partnership with the Tribe and the Muckleshoot Casino does exactly that. We are excited to partner to bring the game of hockey to more Native American youth in our region.”

Honoring the past while embracing the promise of tomorrow, the event as well as the larger partnership also illustrated the striking commonalities between NHL Seattle and the Muckleshoot Indian Tribe: innovators with a dream and a focused determination on a bright future.

“It is a good day to come here with a good heart to represent not only my people but all indigenous people of our region,” said Donny Stevenson, Vice Chairman of the Muckleshoot Indian Tribal Council. “To be able to partner and work with NHL Seattle on the ultimate goal to bring an NHL franchise to Seattle is truly exciting.”

As a partner and sponsor, Muckleshoot Casino will have entitlement to the Power Play as well as a significant brand presence at both the New Arena at Seattle Center and Northgate Ice Centre.

NHL Seattle will also partner with the Muckleshoot Indian Tribe to introduce hockey, a sport with roots in Native culture, to Native American youth in the Puget Sound region.

“This day is truly empowering,” said Conrad Granito, General Manager of the Muckleshoot Casino. “Muckleshoot gaming is the economic engine that has created economic independence and self-sufficiency for the Tribe over the last 25 years. It provides resources needed to improve the tribal community’s quality of life, preserve its culture and lays the groundwork for a bright future.”

Serving as a must-visit gaming destination for nearly a quarter century, Muckleshoot Casino has grown from a humble temporary structure into the largest gaming facility in the Pacific Northwest. And, it’s about to get bigger. A sweeping renovation and expansion is currently underway which will culminate with the debut of a 18-story, 400-room resort in 2022. 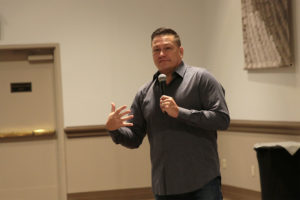